Summary: As a guest in another country, I witnessed a father discipline his son by striking him across the face at the table where we were seated together. In this article I revisit this scene and the site of my own sense of guilt, asking, “How am I to live ethically in a world of strangers, one in which I am both guest and host to the other?” My paper is a self-reflective scrutiny of my failure to acknowledge my own status as an ethical host, one who need not have insisted on prescriptive action, but one who failed his responsibility to not only acknowledge those who face him but also to raise his head and be faced. Through a confessional narrative I examine interpersonal, intrapersonal, and intercultural conflict as an opportunity for cosmopolitan growth. I conclude by resituating ethical difference as an invitation to a curriculum based on conversation.

I had been staying with my host family in Peru for three weeks when I saw Miguel strike his son Alejandro twice across the face. The first blow landed with a dull thumping noise along Alejandro’s jaw and snapped his head to the side. Alejandro tried to chuckle but his eyes had swarmed with tears. The second blow hit him higher up, across his cheekbone, and again his face snapped to the side, but this time his whole body reeled and he had to catch himself by grabbing the back of a chair. When Alejandro ran sobbing to his bedroom at the end of the hall, Miguel sat back down at the breakfast table and said, “I’m sorry you had to see that, Adrian.”

The instant the first blow landed I looked down at my plate and I was not able to lift my eyes for more than a second for the rest of the morning. I was in my own quiet version of shock—shock that this was happening, that I was here, seeing an adult strike a child for the first time, shocked that each blow seemed so loud in a room where emptiness expanded like echoes from Miguel’s hand. When it was over, I only mumbled in reply, still looking down, trying to chew a piece of bread that was now so big and so rough that swallowing it made my eyes water.

In short, I did nothing.

After all, I was a guest in Miguel’s home. As I try to understand what happened in retrospect, I realize that I was submitting to “a certain hegemony of the host” that was “watch[ing] over [my] invitation” (Todd, 2009, p. 112). Something in me understood that this was Miguel’s place, not mine, and that my place existed outside of his decision to strike his son. I still had a presence—Miguel felt compelled to acknowledge me with an apology, not for his actions but for my having seen them—but a ghostly one, as a witness not an agent.

There were at least two conflicts going on in that moment, the most visible of which was between Miguel and his son. I don’t remember what actual events had led to the physical violence. Alejandro had spoken over his father while his father was trying to tell him something during breakfast but the details of what he had said were unclear to me. Insolence, then, would have been Miguel’s charge against Alejandro. A conflict existed between Miguel and Alejandro’s different ways of being in the world at that moment, a conflict that Miguel expressed with his hand.

But another conflict was going in inside me. Recognizing it requires acknowledging “the subject as split—as containing a difference to itself” (Todd, 2009, pp. 48-49; see also Kristeva, 1991). Two ways of being in the world clashed against each other, unseen. Part of me believed that striking a child was wrong (I had never seen it before, even though I knew that it happened) while another part of me believed that being a guest in someone else’s house meant that their rules trumped mine. Part of me opposed what was happening; part of me must not oppose it. This created tension, anxiety, and a hollow feeling like scraping a spoon inside the walls of a pumpkin. By being subjected to my own divided will (act; don’t act) I felt that I could do away with neither one of my internal differences. I was the torn space between multiple ways of being in the world. One could argue that my internal conflict was resolved by choosing, in the end, not to object. Except for an indecipherable mumble, I kept my mouth shut. I did not tell Miguel how to be a father. Who was I to tell him that, anyway? Choosing a certain response should have brought my competing differences into focus and reconciled the space between them. But the conflict was not resolved by choosing inaction as action; I still felt the tension, and it bothered me for a long time. It still bothers me. Deciding on one response had not done away with the possibility of another, divergent response. I became the site of a lingering contest.

I wondered if I had failed a responsibility that I had entrusted to myself through a righteous delusion that I was a benevolent person. A better person than me would have objected, I thought. I could have been that better person, but I had failed to act like him; I had failed to interpret the anxiety that welled up in the wake of doing nothing as a tension between real possibilities. Instead, I wallowed in an instinctual inclination to deference, to accommodating the cultural authority of others.

In one way I had failed what I thought was good in humanity. In another I was experiencing in that very tension what it meant to be human. Sharon Todd (2009), acknowledging Levinas, writes that encounters with difference are the stuff of humanity, not its antithesis or its impediment. In her words,

For Levinas, humans are not humans by virtue of a prior, shared existence in humanity; the ego only comes into being through the traumatic encounter with an other whose existence is radically different from the ego’s own. Thus humanity is not a preconceived ideal, but is located in the proximity where self and other meet. Humanity’s name is the responsibility that is forged out of trauma and the ever-present threat of violence. (Todd, 2009, 19, emphasis original)

Relations and trauma are of humanity to the extent that they lay a foundation for responsibility to others. For Levinas (1999), this responsibility doesn’t take the form of obligatory intervention. It does not entail that one is responsible for correcting the actions of others according to a rationally configured map of what is right. Instead, Levinas’ notion of responsibility is to “the preeminence of the other” (Levinas, 1999, 176); a receptiveness to other ways of being as a mode of one’s own way of being; a responsibility to the other “that finds its best expression in the figure of hospitality” (Todd, 2009, p. 111).

Here, though, hospitality takes on a double meaning because there are two types of hospitality at play—a literal one, in which I am a guest in Miguel’s house, and a figurative dispositional one, in which I have the opportunity (Levinas would say responsibility) to host the difference between Miguel and me. Superficially it might seem that I have played the Levinasian host by accommodating this difference, but this summation doesn’t sit well with me. It acquiesces too easily to tolerance, an orientation that I think is inadequate as soon as the stakes are raised. I still think I failed to participate in a moment of humanity, even if those moments are by nature fraught with conflict and anxiety.

This sense of failure can be understood by returning to the site of conflict. When Todd (2009) describes rethinking “the way we negotiate between three levels of experience”, she refers to “abstract principles and ideas; the way we relate to ourselves; and the meeting of actual people in time and space” (p. 49). In my writing here, that “meeting of actual people in time and space” is the site of conflict—Miguel, Alejandro, and I around the breakfast table. From there the effects spiral upwards through the other two levels of experience, into how I understand myself and how that affects my understanding of a configuration of abstract principles and ideas.

In a Levinasian sense, mine was a failure to exceed myself. I accommodated Miguel’s action only to the extent that I shut down and was outwardly unaffected by it. If freedom is “freedom from my own immanence”, requiring that I “transcend the ego and […] extend [myself] beyond self-interest” in order to “attend to others around me” (Todd, 2009, 63; see also Levinas, 1994), then I fell short. I did not accommodate Miguel’s action. I simply didn’t react to it. Did Miguel fail to be a host? Did he fail to acknowledge the eminence of the other? No. The failure was mine because I never said a word about the difference that I experienced. My failure was one of communication. When I was presented with the opportunity to participate, I only mumbled. Had I said something, it needn’t have been to tell Miguel how to be a father, but to engage, “in a communicative process that focuses attention on the many faces of freedom” (Todd, 2009, p. 69; see also Arendt, 1965).

It seems to me that this is where the responsibility to the other is most urgent and most unassuming, especially for people who are inclined to silently witness the vast and violent differences of the world: we must speak. Not to change others, but to represent ourselves, so that we show up among the differences that have claimed their legitimate right to existence. It is not inherently wrong or right that Miguel struck his son, nor is it inherently wrong or right that I didn’t object. My responsibility, however, is to form one of the nodes of reference for others just as they form them for me. In order to “face humanity”, as the subtitle of Todd’s (2009) book advocates, I must also look up from my plate and be faced. 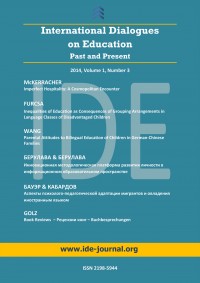 Laura Furcsa: Inequalities of Education as Consequences of Grouping Arrangements in Language Classes of Disadvantaged Children