Out of every ten innovations attempted, all very splendid, nine will end up in silliness. (Antonio Machado)

Innovation and novelty come from the same Latin word, “novus.” These words imply something new. The idea that something is new is dear to our hearts. We have been conditioned by advertisers and promoters to associate “new” with “improved,” whether the product is a laundry soap or a school curriculum. The Oxford English Dictionary defines innovation as “the introduction of novelties.” Innovation is a noun related to the very “to innovate,” first found in print in 1561 in Thomas Norton’s book, Calvin’s Instructions, in which Norton wrote, “a desire to innovate all things moveth troublesome men.” So this term innovation appears to have touched emotions, both positive and negative, from that time to this day.

In the world of education, from primary through tertiary, innovation seems to be all-important. Schools and teachers want to be on the leading edge, to know the latest trend, to avoid being old-fashioned or possibly out of date. Keeping up is crucial. No one wants to be left behind. Perhaps the most ubiquitous innovation that schools at all levels have had to take into account is the personal computer and its corollaries, the internet and world wide web. These innovations are so overwhelming that the extent to which they have and will change access to knowledge remains uncertain. One result of these innovations is the sudden appearance, like mushrooms after a spring rain, of online learning at all levels and across subject matters, including massive open online courses (MOOCS) and even virtual universities.

1) Relative Advantage, the degree to which an idea is perceived as better than the idea it supersedes.

2) Compatibility, that is, the degree to which it seems consistent with existing values, past experience, and needs of potential adopters.

3) Complexity, which is the degree to which an innovation seems difficult to understand and use.

4) Trialability, the degree to which a new idea may be experimented with on a limited basis.

5) Observability, that is, the degree to which the results of an innovation are visible to others.

Given this structure, we can ask ourselves, what innovations in school settings have had positive effects? Computers in classrooms got off to a shaky start and were often discredited as having any positive effects, but over time they have become so useful that they challenge the very term, “classroom learning.” Of course, any innovation placed in school settings is subject to local interpretation. Invariably, teaching and learning is situated and contextual. No matter how pristine the innovation may be in the hands of educational theorists and empiricists, its ultimate test takes place in specific settings, both real and virtual, where teachers and students are the final arbiters of meaning, interpretation, and implementation. This is for better or worse. For example, we can point to the effectiveness of formative assessment as an innovation that has been shown to be highly effective as a means of raising student achievement. But in any given classroom or lecture hall, formative assessment will be implemented or not as interpreted in that specific contextual setting.

In John Hattie’s book, Visible Learning for Teachers (London/New York: Routledge: 2012), we find 138 summaries meta analyses of particular educational innovations. Among those receiving high effect size scores are Piagetian programs, formative evaluation, direct instruction, teacher clarity, and metacognitive strategies. On the low end are such innovations as ability grouping, team teaching, distance education, and problem-based learning. Whether innovations succeed or fail often reflects the extent to which they are compatible with local norms, how complicated or easy they are to implement, what happens when they are tried in classrooms, and „word of mouth“ opinion in the educational community.

All this is to say that we are learning more about what works effectively as well as what doesn’t, but there are many contingencies. We never “prove” anything in social science “soft” research, but we do build a case for support or lack of support over time. Innovations come and go. More often than not, they fade away in spite of the early promises made by their promoters. Increasingly, we are learning ways to test their effectiveness, and this enables us to make evidenced-based arguments. However, there will always be cultural norms, political considerations, ease of implementation, sustainability, scalability, teacher training, and economic factors including monetary cost as well as global competitive advantage.

This special thematic issue of International Dialogues on Education: Past and Present is dedicated to innovation. The articles that appear in the following pages are edited papers from the sixth biennial “Symposium: Educational Innovations in Countries around the World,” held on the campus of Seattle Pacific University in Seattle (USA), June 30-July 2, 2015. The papers fall into three categories of educational innovation: policy, technology, and curriculum/instruction.

Policy-related papers include Robin Chen’s analysis of the No Child Left Behind policy with reflections from Taiwan and East Asia; Pierre Ruffini’s investigation of the economic costs of university education in an era of unprecedented expansion of enrollments; Anja Franz’ article on retention and attrition of doctoral students in Germany and USA; both Ryszard Kucha’s and Dorata Zdybel’s reflections on the difficulties of educational development in Poland; and Kas Mazurek and Marget Winzer’s paper on conflicting international cadences of inclusive schooling.

In the area of curriculum and instruction, Douglas Asbjornsen considers the efficacy of project-based learning as an educational innovation; Solvejg Jobst and Tom Are Trippestad address the ambivalent social and cultural consequences of changing educational structures in an age of global education, Daniel Johnson-Mardones explores curriculum as phenomenon, field, and design, Reinhard Golz provides a historical/cultural perspective on peace education; Oihane Korres and Iciar Elexpuru report their findings of an investigation of values perceived by adolescents in their favorite television characters; Tatyana Tsyrlina-Spady and Michael Lovorn share their analysis of history textbooks used in Russian and American secondary schools; John Bond, David Denton and Arthur Ellis employ a best-evidence synthesis of effects of student reflection on academic achievement; and Richard Scheuerman, Kristine Gritter and Carrie Jim Schuster’s article features sustainability education in collaboration with Native American perspectives.

Three articles on educational technologies include Shu-sheng Liaw’s article on gender perspectives on mobile learning environments; Hsui-Mei Huang’s investigation of experiential learning in e-commerce classes; and Marianna Richardson’s paper on the transformative nature of social media in a global society. In each case, the authors cast a critical eye on the strategic use of certain new technologies.

This collection of articles under the umbrella category of Educational Innovation suggests a wide range of interests and perspectives. This is to be expected since education is not an academic discipline in the sense that physics, sociology, and geography are, for example. Rather, education, like medicine and law, implies a field in which practice is the rule. Individuals practice medicine, law, and education, and such practice takes place within a context in which the expectations are sanctioned by society with all the freedoms and responsibilities implied. As a practice, Education involves theory, empiricism, and day-to-day implementation in real-world settings. Thus we find policy, norms, economics, pedagogics, administration, and a multitude of other interests in play. In this spirit, I hope you will find these papers useful and instructive.

In the name of all participants of our symposium I especially want to thank Symposium Project Manager Stephanie Wieland for her heroic efforts that contributed invaluably to the success of this event. My expressions of gratitude are extended to Kelsey Creeden and Leandra Reuble, our editorial team, and also to Oleg R. Zayakin for his translations into Russian.

Finally it must be said that this thematic issue would not be possible without the generous leadership of Olaf Beuchling, Reinhard Golz, and Erika Hasebe-Ludt, Editors of International Dialogues on Education: Past and Present (IDE). 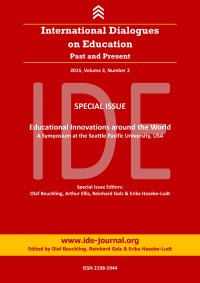 Robin J. Chen: From No Child Left Behind to Flexibility: An Observation from East Asia

Anja Franz: The Social Position of Doctoral Candidates within the Academic Field: Comparative Considerations Regarding Doctoral Program Attrition in Germany and the USA

Dorota Zdybel: Pedagogical Innovations as a Part of Educational Policy in Poland – Trends and Prospects

Kas Mazurek & Margaret Winzer: Intersections of Education for All and the Convention on the Rights of Persons with Disabilities: Explaining the Conflicting International Cadences of Inclusive Schooling

Douglas J. Asbjornsen: The Development of Innovation Skills through Project Based Learning

Reinhard Golz: The Foundation of Peace Education by Jan Amos Comenius (1592-1670) and its Topicality

Tatyana Tsyrlina-Spady & Michael Lovorn: A Curriculum of Ideology: Use and Abuse of Modern History Education in Russia and the United States