This book is the 11th publication in the book series “Region and Education” of the Center of Higher Education Research and Development (CHERD) Hungary. The series – written by the researchers, PhD-students, and cooperation partners of the Research Institute – deals with a broad range of topics concerning the regional and religious dimension of education. The new book presents the results of the research project “Learning Regions in Hungary (LeaRn)”. We learn from Tamás Kozma´s preface that the interdisciplinary project was funded by the Hungarian Scientific Research Fund OTKA and the research was carried out between 2011 and 2015 at the University of Debrecen in collaboration with other international institutions.

Chapter 1 presents the scientific theories and research projects on a national and international level. According to the authors the term “learning region” has been used as a development-policy slogan. The concept can be traced back to the 1980s. Research studies about human resources management and innovation processes (especially about interactive learning) and the model of web-based learning are its theoretical background. The strengthening of the regional dimension and the bottom-up principle of democratic decision processes are its political background. The concept of the learning region was adapted to the Lifelong Learning policy of the European Union through international organizations like OECD and UNESCO. In the EU member states – like in Hungary – it led not only to different (educational) policy actions but also to different research and development projects.

The concept of the LeaRn-project is based on a Canadian (CLI) and a German (ELLI/DLA) study and on several previous research projects of the CHERD. The research design defines the learning-region concept as a typical research and developing concept, in which “research occurs in appearance not as exploration, discovery or description of regularities, but as a social movement or community development” – in other words, as action research. The goal of the research project – based on the German Learning Atlas („Deutscher Lernatlas“, DLA) – is to draw a map of the learning regions of Hungary, which includes data about formal, non-formal (“individual”), and communal learning processes (communication processes between members of a community). The following research methods were used: statistical data collection, questionnaire, interviews, participant observation, case studies, and comparative analysis of settlements. Chapter 1 shows clearly the complexity of the research design and the difficulties of an empirical assessment of the Hungarian learning regions.

Chapter 2 defines the key terms – learning region, learning city and learning community –, which also shows the three levels of the analysis. The study divides the term of learning region into two categories: economical and the cultural/educational. A learning city is part of a learning region, characterized by its successful conformity to the fast changes in economy and society. Universities play an important role in this process as key actors of the learning society and the innovation system. They take responsibility for local and regional development. The study shows that in Hungary the potential of the universities is not well used for the economic and social development of their cities. The term learning community means a unit – for example a district – within the learning city.

Chapters 3, 4, 5 and 6 present the dimensions (“pillars”) of the Hungarian learning regions: formal, non-formal, cultural, and community learning with empirical analysis. To draw a map which shows all these dimensions, the researchers chose the most important indicators and worked out a complex index for each dimension. These indexes helped to create the learning maps (presented in the Appendix).

Chapter 3 focuses on the formal learning, which means institutional learning within the public school system. This dimension is empirically well underpinned (in fact, more than the others) by a lot of statistics as well as international and national studies. The LeaRn-project includes the so-called “non-traditional” learning group: Roma, migrants, adult learners. The research focuses on higher education because the project concentrates on adult-learning processes, and the graduates of higher education are the experts who use their knowledge in work and social life. There are two indicators on which the index is based on: the proportion of unemployed people with a higher education degree and the availability of learning institutions.

Chapter 4 discusses non–formal learning, which includes adult education and vocational education and training (within and outside the public school system), traditionally specialized for the respective local population. The analysis was carried out on the national, regional, and local level and is focused on the so-called “small sub-regions” (“kistérségek”). The main perspective of the analysis was the success in the labor market; therefore the most important indicators to create the index were the proportions of the employed population and the number of companies.

In Chapter 5 the authors zoom in on the discussion of cultural learning (“individual” learning), which they define as a special form of informal and non-formal learning. They emphasize three areas, i.e. culture, sports, and media. Here the research methods are case studies and questionnaires. The indicators to create the learning index were: the number of participants/students of the learning institutions, the number of the learning opportunities in these organizations, and the number of the pupils who took part in it. The analysis shows the compensatory role of cultural learning very clearly, which in the Northern Lowland (Észak-Alföld) region was aided by its economical-social development.

Chapter 6 presents some typical cases of community learning. Starting point of the analysis was the hypothesis that regional knowledge, inventions, and traditions build a complex “knowledge-industry” (“tudásipar”), which (re)produces the regional-local knowledge and strengthens the local self-consciousness (we-awareness). This is a key aspect of social-economical-cultural development.

The first case study features the example of the Finnish community in Geresdelak. For the local population this community is a source of new knowledge and a new lifestyle model as well. The second case study compares Szarvas and Mezőtúr, two cities in a similar regional situation. The study shows how different the role of a learning community can be: In Szarvas the communal knowledge has been used to overcome difficulties, in Mezőtúr to think about the past. The authors show that in Mezőtúr such a community learning process, which could promote a community self-consciousness, did not exist. This has a negative impact on the economic and social life of the city. The third case study also compares two cities: Tiszaföldvár and Kunszentmárton. We can see from the example of their high school (“Gymnasium”) that dealing with its own history can promote or prevent the construction of a local identity and through that influence the development of the local community. The authors point out the significance of the so-called key persons, of horizontal cooperation, alternative learning centers, and of the local “knowledge industry”. Analyzing the Tanoda program – which was funded for promoting the integration of Roma, and other students with multiple deprivations – the authors show an example for community learning in NGOs. Because there are only very few empirical studies about the program, they used the method of participant observation to show the disadvantage of reducing community-building impact. With the analysis of these (and other) case studies the researchers describe community learning as a community activity, i.e., as an activity of citizens for the sake of the community. Here, the amount of donations and of charity activities serve as indicators.

Chapter 7 presents the result of the research project: the learning maps of Hungary. There are four learning regions: Budapest and its surroundings, the region Budapest-Győr, the corridor Budapest-Balaton, and the region Balaton. Their most important similarity is the closeness to Budapest, which shows the traditionally strong impact of the Hungarian capital. The authors also emphasize some learning cities, which “stand out from their environment not like a stripe but like a point” (p. ) and have a positive impact on their area: Miskolc-Eger, Debrecen-Nyíregyháza, Szeged, Pécs, Szombathely, and Kecskemét. Characteristic for them is that in their centers are learning institutions (schools, universities) which can be defined as regional intellectual centers. With regards to the learning communities, the researchers call attention to the so-called “regions with weak potentials” on the outer periphery: the areas of North-East, East, and Southwest Hungary. On the inner periphery they point to the areas of Bakonyalja, the Marcal-cove, Outer and Inner Somogy, and the area along the river Tisza. The most important similarities of these are their low transport accessibility and the weak density of their institutional system and political activities. The study describes them as stagnant regions because the form of community learning has not reached the organization level of the learning cities or learning regions.

Chapter 8 shows the map that summarizes the results of the research project: the learning regions of Hungary. Like the German Lernatlas, this map should help to define the directions of regional educational development. The regional (educational) political actors in Germany use the Lernatlas to build a regional network connecting formal, non-formal, and informal learning opportunities. The authors have named three main development tasks for Hungarian educational policy:

However, not only politicians and educational scientists can use the map, interested citizens can also find their current or future place of residence on it and compare it with other cities, villages, or regions. In this way, the research results can perhaps help them to choose their place of residence.

The book ends with an appendix which includes a citation index, a list of the publications about the research project, all learning maps, and an English-language summary.

To summarize, the book presents the results of the LeaRn-project very clearly, with interesting examples. It is comprehensible not only for (educational) scientists or politicians but for everybody working in education, either theoretically or practically. Therefore I would recommend it for these audiences. 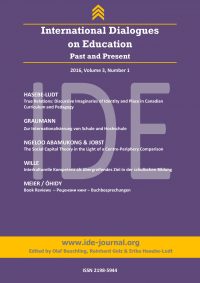 Brendan Ngeloo Abamukong & Solvejg Jobst: The Social Capital Theory in the Light of a Centre-Periphery Comparison