Both neuroscientific as well as evolutionary approaches to human learning have made great advances in the recent years. Both fields will become essential sources of understanding learning and the role of pedagogy in transmitting human culture. Paul Howard-Jones, British neuroscientist at the School of Education, University of Bristol, and TV broadcaster, has written a new book in which he presents an overview of recent perspectives in this interdisciplinary field. Evolution of the Learning Brain is an entertainingly written and continuously illustrated publication, which covers no less than 4.5 billion years of evolutionary history from the Big Bang to the powerful brains of homo sapiens today. It is logically structured, thematically varied and always written in a very readable style. A clock with digital display accompanies the reader through the entire book. It ticks for 24 hours, from the time when researchers suspect the beginning of life on earth to the prospects that the author dares to have for the future of the human brain. This clock is helpful to visualize all the milestones that have existed over this immense period of billions of years.

Howard-Jones` book begins by offering the reader a short but insightful narration on the concept of evolution and its core ideas such as natural selection or heredity. In the following chapter “Origins”, Jones starts out with the Big Bang, which scientists date about 4.5 billion years ago, and Jones explains that this is still only a hypothesis about how the universe came into being in the first place. After a brief introduction into rough assumptions about it, he starts the digital clock at “3.8 billion years ago”. The following is a presentation of important basic biological knowledge: What are pro- and eukaryotes, how are they structured? Does the Escherichia coli or E. coli bacterium have something like a memory and a rudimentary capacity that could already be described as learning?

As soon as the author addresses the first multicellular animal species with the sponges 600 million years ago, the digital clock already shows “20:12:37 pm” – the future in which we find ourselves today is therefore only 4 hours away and so far we have only got to know a few – and admittedly still very simple – life forms. This will bring a real wow effect, especially for readers who are still unfamiliar with the subject, to realize in which rapid steps the following developments have taken place.

After the sponges, jellyfish with the first nerve cells, as well as the electrical and chemical synapse, which is one of the greatest surprises from the researchers’ point of view due to its complexity. Howard-Jones leads at this point to the first bilateria (two-sided animals), whose learning needs are great compared to jellyfish, which is why a chemical synapse makes sense for them.

The third chapter is devoted to new forms of life. From the Bilateria on, biodiversity exploded: within less than 200 million years, the first vertebrates were formed. The author describes that fortunately the land had been offering food in the form of supporting microbial life – which in turn helped to transform the land with nutrients. Meanwhile photosynthesis was about to happen, whereupon green algae, which all plant life evolved from, came into being.

About 240 million years ago, dinosaurs, related to reptiles, dominated for almost 100 million years, but at the same time there is evidence of an animal that is very similar to mammals: the so-called Adelobasileus, to which Howard-Jones adds his own drawing.

Howard-Jones now describes over several pages which brain structures have developed how in vertebrates – the cerebral cortex, the cerebellum, the basal ganglia and the hippocampus are of particular benefit here, because each of these features refers to a specific learning system. For example, the hippocampus evoked the establishment of a memory system in the brain that was of great relevance for survival. But on the other hand, sleep is needed for good memory. Howard-Jones illustrates this consequence and its importance (to this day). He also offers the reader a glance at the relation of stress and learning (remembering) by means of current studies.

In the chapter “The Social Primate”, we are 65 million years in the past: The mammal species that have survived until now produced the great apes, our ancestors. They have a lot smaller olfactory bulb, but an enlarged cortex. In the chapter it is shown in detail that brains became more and more developed in comparison to other mammals, which naturally requires more energy and thus enormously increases the need for food. Their social coexistence justifies the evolution and use of such a large but demanding brain. At this point, the author again presents some relevant terms and “extensions” of brain development, including the theory of mind, social learning or mirror neurons. The importance of role models in social learning, an aspect to which great attention is paid in experimental research by evolutionary scientists like Kevin N. Laland, William Hoppitt or Joseph Henrich, is also summarized. Of course, here as in other chapters of this book, one should not expect an in-depth discussion of the topics mentioned.

In the following chapter,‘homo’ finally appears. Howard-Jones describes the various steps that hominization took along the Great African Rift Valley, until homo habilis, the first human species, emerged. About 1.9-2.5 million years ago, it is said to have developed and later evolved into homo erectus.

Chapter 5 explains the advantages such a large brain might have and how the roots of cultural learning emerged at the time of homo erectus. Jones’ statements on flexibility and the so called “oxytocin-switch” are fascinating. The latter constitutes the cause of a more intimate (social) environment, hence the initiation to a cooperative social life has taken place. This meant the birth of teaching and Howard-Jones is in good company, when he describes our species homo as “the cooperative social learner”. The basis for cultural learning was established.

In the following chapter on the evolution of speech, Howard-Jones first sums up that 1.8 million years ago, a lot had already emerged that forms the foundation of culture. He then focuses on the emergence and spread of homo sapiens, estimated 200,000 – 60,000 years ago. An information box shows the value of symbolic language in cultural transmission, compared with other modes of transmission like reverse engineering (the novice studying the outcomes of others) or even imitation (the novice is observing the skill of a role model). It becomes concrete what the learning content is about: language, gestures, symbols. Howard-Jones sketches competing theories and discusses whether gestures or speech came first and what brain structures were needed to become a lifeform in which symbolic thought and language emerged. The author states, that the “ability to transmit and receive abstract ideas using symbols has been cited as the key achievement that elevated H. sapiens to top predator” (p. 107).

Without the capacity of generating and transmitting symbols, numeracy and literacy would not exist. Chapters 7 and 8 are devoted to these cultural innovations and their neurological basis. Both achievements require complex brain structures, the ability of symbolic thinking and are regarded as “together forever” (in terms of origins) by the author. With the written word, an understanding of symbolism, of arbitrary signs that another had to decipher, became all the more established. The acquisition of reading skills in this sense strengthened the visual cortex in particular. With the arrival of numeracy material artefacts supported our brain function as well as the use of fingers (to a certain degree). Our memory improved, material culture augmented our brain. From the usage of fingers by children in the counting and calculating learning process to important topics such as dyslexia or theories about the functioning of the left and right hemispheres, this chapter contains many interesting impulses even if most of it is only briefly touched upon.

Howard-Jones thus creates a successful transition to the 9th chapter, which deals with pedagogy and the evolutionary achievement that connects the brain with such a great deal of learning capacity. He takes a brief (and somewhat eclectic) look back into the history of pedagogy, mentioning the Hindu Vedas, Quintilian, G. Stanley Hall and Jean Piaget on just a handful of pages. Clearly, these paragraphs of the book are not meant as a history of education. His comments on some – in his opinion – “evolutionary myths” of brain development and learning are more helpful. The same applies to Howard-Jones’ summary of “educational learning from a deep-time perspective” (pp. 160-168).

In the final chapter the reader arrives at 00:00:00 am, that is, the present. Here Jones tries to take a look at the future. He outlines four possible scenarios for the future of our species and rounds off his work with a thought-provoking conclusion that questions our efforts at progress and the recognition of our still today astonishing brain. Especially in this concluding chapter, Jones is ambitious in defending the great importance of his neurobiological knowledge and emphasizing its importance for every human being.

Howard-Jones’ new book will be a pleasant and inspiring read for a broader readership, including undergraduates. It may also give more advanced students from neighbouring fields a varied, handy overview and synthesis of recent research in evolutionary neuroscience and education. Given the thematic breadth of the book and the evolutionary period it covers, the reader should not expect an in-depth study. Much is only touched upon, competing interpretations are sometimes merely hinted at. For some readers, it may focus slightly more on the natural science side of the subject, while questions of cultural evolution or gene-culture co-evolution are addressed more briefly. Nevertheless, the book offers understandable and manifold information on a continually expanding research field and is therefore also suitable for those readers who are looking for an introduction to neuroscientifically informed pedagogy. One last critical comment on this otherwise successful publication: the illustrations of the book are in need of some improvement. A well-known publishing house like Routledge should be able to provide the reader with more professional graphics instead of the more or less amateurish drawings actually used. 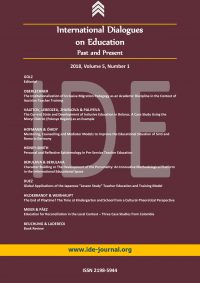 Manfred Oberlechner: The Institutionalization of Inclusive Migration Pedagogy as an Academic Discipline in the Context of Austrian Teacher Training

Natascha Hofmann & Andrea Óhidy: Mentoring, Counselling and Mediator Models to Improve the Educational Situation of Sinti and Roma in Germany

Mikhail Nikolayevich Berulava & Galina Alekseevna Berulava : Character Building or The Development of the Personality: An Innovative Methodological Platform in the Informational Educational Space

Elke Hildebrandt & Mark Weißhaupt: The End of Playtime? The Time at Kindergarten and School from a Cultural-Theoretical Perspective