Götz Hillig, faculty member of the Institute of Education at the Philipps-University at Marburg (Germany) was respected as an outstanding researcher on the works and life of the Soviet (Russian and Ukrainian) pedagogue Anton Semyonovich Makarenko (1988-1939), not only in Germany but in the world. He died after a couple of years of serious disease. His perseverance in exploring a single educator throughout the full professional career is singular.

Early in his university education he came across the books of Makarenko yet could not think of an academic career for himself. He expected to be a school teacher and finally passed the state examinations for secondary teachers. Nevertheless he preferred to see himself as an editor of German exile literature. His approach to literature was collecting, documenting, clearing all circumstances and editing. Beneath the scientific endeavour a deeper motive was at work. Being a son of a manufacturer in the town of Chemnitz (in GDR times called „Karl-Marx-Stadt“) in Saxony it was his wish to contribute to establishing new relations to Germany’s neighbours in the East, especially to Poland. He put this intention into practice within a students working group at Marburg by regularly travelling across the iron curtain.

In 1963 he came out with an inventory of all publications about Makarenko and all translations of his writings in West German libraries which still today is useful. This publication paid personally when in 1968 Hillig was appointed an assistant lecturer with Prof. Leonhard Froese at the Philipps University. Froese had taken notice of Hillig’s publication and offered him this position. Whereas Froese had somewhat rashly declared Makarenko the most impressive personality in the field of education in that century, Hillig was more hesitant in lauding Makarenko, he soon knew that much critical work on sources and texts was to be accomplished before a fair judgement was feasible. Froese meanwhile changed the mood towards Makarenko among German educationists.

In relatively few years Hillig acquired both involved languages Russian and Ukranian, both written and oral. His companion who also started work with the newly founded Makarenko-unit, Siegfried Weitz, enjoyed the advantage of completing Russian studies within the teacher training at Marburg university. Hillig’s commitment with the Makarenko research unit at the University of Marburg resulted in a lifelong search für documents connected with Makarenko’s activities in the field of youth education in archives and libraries in socialist countries. In the midst of the so called Cold War between East and West Hillig was a traveller into those countries although as a child he fled from the German Democratic Republic (GDR; East Germany) together with his parents and siblings where the family had to leave behind their fortune. As his father who even was imprisoned in the GDR as a co-called class enemy was not allowed to return Hillig recognised his obligation to know more about these countries and to be in touch with private people there. Perhaps his private archive will reveal the difficulties of these travels. The multitude of these travels which were untypical in those days for individual persons without official backstop and the multitude of friendships which came out of them in this period of mistrust are worth to be recognised.

The findings in the archives soon made the Marburgers plan to accomplish at Marburg a bilingual edition of all writings of Makarenko. The interventions into the original Makarenko-texts which the Soviet editors had conducted were too many, in terms of omissions, distortions and insertions. They ought to be reversed at the base of original texts. For Hillig this ambition set the melody for his full professional life. At least four decades he spent to this goal and additionally he cleared many events in Makarenko’s life.

Hillig’s knowledge on Makarenko was asked for in Germany-West and Germany-East as well. Some Makarenko adherents in the GDR were in contact to Hillig. His knowledge on the contemporarian Soviet Union grew together with his travels, he collected a private library especially on the Soviet Union, also on other East European socialist states, yet he did not slacken his focussing on the topic of Makarenko. It was not Hillig’s fault that the Marburg edition was abandoned in the midst of its way, rather the publisher in Ravensburg in Southern Germany dropped the project for financial reasons. Not more than 8 of the planned 20 volumes were released. Many more individual texts of Makarenko were translated and documented by Hillig in his textcritical manner in journals. They all should be parts of the Marburg edition, yet today are not easy to find on diverse places. Seen from today the question suggests itself if not a group of professors of Comparative Education could have raised that money and helped to continue the edition. Yet, the co-operation across university institutes in common projects was seldom practised then.

About Hillig struck the selflessness and modesty of his way of research. The focus was on the topic, never on him as person. He could cite dozens of episodes and statements of Makarenko’s life and of people who knew him and nearly always there was a sense of humor in his tellings. The ability to take pleasure in his research topic despite its political gravity probably was part of the easiness which he inherited in the upper middle-class family, he was born into at Chemnitz. This obviously survived even the stubborn mentality of the rulers in the GDR. To his immense factual knowledge about Makarenko those debators who were enthusiastic towards theories or even ideologies had to yield. It is a pity that Hillig did not receive a professorial chair. He was an academic full of surprising narratives. Yet to be so devoted to one’s topic sometimes means to miss the own career. Hillig was not a venerator of Makarenko, he did not ignore the dubious traits of this historical figure of pedagogy, he worked at the picture of Makarenko on the basis of critically examined sources and facts. 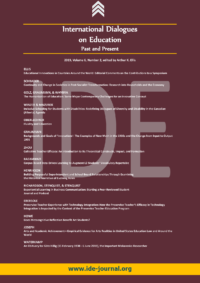 Arthur K. Ellis: Educational Innovations in Countries Around the World: Editorial Comments on the Contributions to a Symposium

Heiko Schrader: Continuity and Change in Societies in Post-Socialist Transformation: Research into Households and the Economy

Günter Graumann: Backgrounds and Goals of ‘Innovations’: The Examples of New Math in the 1960s and the Change from Input to Output 1995

AnnRené Joseph: Arts and Academic Achievement―Empirical Evidence for Arts Realities in United States Education Law and Around the World