Roma and Sinti minorities have been in Europe from many centuries, but there is little information about these groups available today. It is interesting because about 250,000 to 300,000 Roma and Sinti people live, for example, in Germany alone (p. 22). All of the minorities usually have difficult situations in their everyday lives because they have other languages, habits, and lifestyles, so their behaviour is often incongruous to others in mainstream society in different situations. This is true for education as well, but there are always some people – researchers refer to them as resilients –, who can be successful despite their disadvantages. It is interesting to learn more about the backgrounds of these successful people in order to understand the reasons for their success. First, they act as examples for others in similar situations. Second, if specialists know the positive conditions which led to successful completion of schooling, they can use this information to optimize paths to success for Roma and Sinti, the society can develop, and the minorities can more easily adapt to mainstream societal norms.

Romina Meinig is a teacher trainee who is interested in people who belong to Roma and Sinti minorities and how they can complete at least one type of schooling. She wrote her research experiences in a book, which was published in 2019 as the 42. volume of the series “Gypsy Studies – Cigány tanulmányok – Roma Studien”. The book has two parts: The author first writes about the theoretical background of Roma and Sinti studies. Secondly, she analyses four interviews with Roma and Sinti people. These interviews discuss paths the subjects took in their lives with a focus on their education. The author is interested in the following topic: how can Roma and Sinti people successfully complete school.

The concepts of resilient, risk factor, and protective factor structure the theoretical background of the study. The term of “resilient” has multiple definitions, but the author uses the conception of Schmidthermes: to be a resilient person means to be successful against many negative circumstances and life conditions. According to the specialists, risk factors are the conditions which can have a negative influence on a person’s life. Maybe it is an illness or an accident, but a risk factor can be a mental or a psychosocial condition as well. Personal resources or helpful people close to the resilient person are mentioned in the special literature as protective factors.

The author writes in her book that the Roma and Sinti people must fight against Antigypsyism: a negative social phenomenon which the majority society directs towards Roma and Sinti people. Furthermore, the participation of Roma and Sinti people in education and their social conditions cause challenges in everyday life. Poor language skills is the greatest disadvantage which these people face and is the reason why they spend so little time in educational institutions. They usually do not attend kindergarten and typically drop out of school before graduating. Other reasons can be, for example, negative experiences or segregation in school, and prejudiced teachers. These reasons have negative effects on the school achievement of Roma and Sinti people as well. Hence, Roma and Sinti people are threatened by poverty and unemployment because they are not (well-)educated, they belong to a minority group, they do not have German citizenship or generally good living conditions, they fight against prejudice, and so on. There are some people who are able to become successful in education despite these circumstances and are able to make better living conditions for themselves and their family.

The most interesting part of Romina Meinig’s book is the four interviews, which she held with one Sinti and three Roma people. The two women and two men who were interviewed are between 15 and 39 years old, and all of them completed at least secondary school. One woman was born in Germany; the other three people moved or fled from Kosovo or Bosnia to this country 5-28 years ago. While Meinig summarizes the results of the four interviews on a whole, each interview was completed individually on a one-on-one basis.

This qualitative research has two hypotheses: (1) if somebody’s life has some protective factors, they can result in successful completion of schooling; (2) Roma or Sinti people have stronger feelings of social integration in the majority society after successfully completing school. The questions of the half-structured pathway-interviews were inspired by Daniel Strauß’s questions and these were constructed in five thematic blocks. These are about (1) people and social resources, (2) fight strategies, (3) factors of integration, (4) development and (5) general information or situations related to the researched topic.

Risk factors in terms of education included poor language knowledge, educational deficits, and one of the interviewees reported a delayed entrance to school. Undereducated parents, death of a family member, refugee status, migration background, poor social conditions at home, and discrimination were listed as social risks. Naturally, not every risk factor mentioned was relevant for every interviewee, but most were true for the majority of participants.

Romina Meinig was interested in researching how these people could successfully complete one type of secondary school, despite these difficult conditions. She found more factors which were helpful on the pathway of these people as well. Many of the interviewed people mentioned their own will or their ambitious and open character. All of them are motivated and would like to be more educated. One of most important factors was the support of other people, for example family members, friends, teachers or psychologists.

In summary, the author found that the first hypothesis was verified, which means that protective factors can support success in education. The interviewee said that if somebody has a qualification, they can be recognized, and it is easier to get a job or to integrate to society. While, three people are proud of their minority identity, one of them thinks that education helps them to separate themselves from other Roma and Sinti people who would not integrate themselves into the majority society. In contrast to the first hypothesis, the second was not verified. Romina Meinig assumed that a successful school completion creates a stronger relationship to the majority society. The interviewed people said that they have relations or common free time activities with some members of the majority, but three of them strongly identify as Roma and Sinti. The fourth person tries to hide their minority identity not only in their native country, but in Germany as well. The reasons are, for example, experiences of discrimination and their attempt to try to find their own identity.

In my opinion, Romina Meinig’s book can be interesting for not only specialists, but all members of society. It can be a source of motivation for members of the minority to be well educated and successful in life. After the reading this book, the majority can view the social problems from another perspective. The book can be an interesting reading experience for people who would like the pathway interviews as well. The book does not contain the transcripts of the interviews in whole, but the citied details and author’s analysis inspire further consideration. 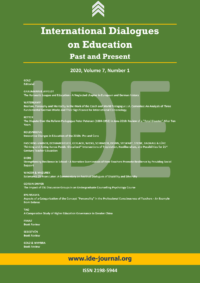 Dietmar Waterkamp: Realism, Pansophy and Mentality in the Work of the Czech and World Pedagogue J.A. Comenius: An Analysis of Three Fundamental German Works and Their Significance for International Comeniology

Hein Retter: The Dispute Over the Reform Pedagogue Peter Petersen (1884-1952) in Jena 2010: Review of a “Total Disaster” After Ten Years

Irina A. Kolesnikova: Innovative Changes in Education of the 2010s: Pros and Cons

Natalia V. Bylinskaya: Aspects of a Categorization of the Concept “Personality” in the Professional Consciousness of Teachers – An Example from Belarus