As a book length study on young refugee Roma from South Eastern Europe in Germany, Bildungswege und gesellschaftliche Teilhabe junger Roma in Deutschland, is a relevant contribution on challenges and barriers that the Roma minority face daily in all significant areas of life in Germany and across Europe.

Natascha Hofmann has written a uniquely researched and brief description of migration as seen through the lens of the Roma refugee youth and young adults from ex- Yugoslavian countries, aged 14 to 25 years, who came to Germany between 1992 and 2004. These Roma youth and young adults are living with either a toleration certificate or residence permit in Tüberg and its surroundings. In most of the case, the legal status has had deep negative implications on all aspects of life for the Roma minority.

The author draws upon observations, interviews and informal conversations with supervisors of refugees and other persons of interest as well as with predominantly male Roma interviewees, which were included in an empirical study conducted in 2007. They revised the results and updated the analysis, bringing a new perspective on the daily living conditions and the development of the education process of this community.

The introductory chapter opens the study by explaining that migration often amplifies the uncertainties and dissatisfaction of both the immigrants and local populations and exacerbates socio-economic inequality (p. 11). As the author remarks, the ethnic minority commonly referred to as Roma, which encompasses approximatively 10 to 12 Million members, has become a target for discrimination and persecution in many countries across Europe, an experience which they have become familiar with over past centuries (pp. 12-14). As the author explains, the term “Roma” is used as an umbrella term (p. 12). Further descriptions and explications are developed in chapter 3.1 (pp. 52-54). After briefly addressing the action plans and policies decided by the European Union in order to protect and include this vulnerable minority in the host countries, Natascha Hofmann sheds light on the importance of education, in fighting stereotypes and prejudices and improving their participation in the society.

Chapter 2 offers rich theoretical insights into the history of this ethnic minority, as well as the phenomena of inclusion and integration, the impact of social status, milieu affiliation and exclusion mechanisms in social participatory processes, as well as the influence of education on the integrative process. According to the author, “education is the key to individual life chances and participation in social life”(p.19).

Hofmann draws on a range of theoretical frameworks in her analysis of the aforementioned notions, from Humboldt’s concept of Bildung as a tool of self-development (p. 37) and Hof’s and Óhidy’s as a lifelong process (p. 38) to Reinhold’s concept of integration as an “incorporation of an individual into a social group with simultaneous acceptance as a member” (p.23). The author also states that the following concepts also are of great importance in the integration process: external assignments and perceptions, the binary code other/foreign as a deviation from the familiar – or the staged own and the figure of the foreigner (pp. 26-31). Moreover, minorities and migrants are highly disadvantaged when it comes to social participation, as the decisive factors for it are primarily social status, milieu affiliation and the power gap within a society as according to Bourdieu ( 1982) (p. 31).

Throughout both chapters, the readers learn that Roma and Sinti children remain disproportionally overrepresented in special education schools and underrepresented in secondary schools (p. 13). The German school system is a place where social inequality is still reproduced and it is in need of reform (p. 42). There is almost no other education system where the socio- economic background of the parents influences the academic performance of their children as strongly as in Germany (p. 41). As the author concludes, the integration process implies intersectionality of external factors such as access to education, employment, language skills, accommodation, contact to the local population and having a stable legal status as well as internal factors such as individual prerequisites, subjective perceptions, identification and exclusion mechanisms (p. 50)

We argue that Chapters 3 through 5 provide the most significant contributions of this book, as they reveal and explore the subjective perceptions and the lived experiences witnessed by the interviewees, predominantly young male Roma from Kosovo, Serbia, Montenegro and Republic of Macedonia. Chapter 3 begins by problematizing the generic term of Roma or the “umbrella term” as the author calls it (p. 50), in consideration of the diverse subgroups, which are included. The question that the author poses is if there is unity in the Roma minority in spite of the diversity present among them (p. 51).

The population summarized under this umbrella term differs in many aspects, such as historical profession, religion and language. Roma often assimilated to the majority language and gave up their own Romanes dialects in an effort to avoid discrimination. Hofmann emphasizes those aspects such as identity and language constantly by presenting excerpts of the interviews (pp. 51-52), so that the readers can relate them to real experiences of the young Roma. She focusses on the use of the term “cultures” instead of “culture” to emphasize the diversity of the Roma population. In order to make the German residence rights more comprehensible to readers, we think that the author should have included an excursus here.

The following subchapter is dedicated to the shared experiences of the Roma originating from the Balkans throughout history and in present day. The author points to the loss of confidence of the Roma minorities in the majority societies, which is due to discrimination, persecution and genocide (pp. 59-60). She details the connections between discrimination, poverty, segregation and education (pp. 61-62).

Chapter 4 encourages a closer consideration of these causal relationships. According to Hoffman motivation is the prerequisite to accessing education. She establishes a connection between the knowledge of the functional structures in Germany, such as the right of residence and the education system, and knowledge of the national language as relevant to the self-confidence and self-efficacy of young Roma (pp. 70-71). Schools, teachers and other mentors have a high impact on their motivation. It is also pointed out that residential status, age at the time of arrival in Germany and educational background influence educational success (pp. 71-78). The author draws on the aforementioned historical reasons and traditional family values to shed light on these causal relationships. It is important to collaborate with parents in order to appreciate the values of the Roma families and their traditions. They are seen by young Roma as an example of family building and as role models and have an important significance in their lives.

Chapter 5 relates the process of integration of the interviewed young Roma and their identity and future plans. The chosen excerpts of the interviews focus on their reality as in-between-cultures, as “schon irgendwie entzweit” (“already somehow divided”, own translation, p. 118) and how they develop strategies to deal with discrimination (p. 127).

The author explains the impact of the research design on the achieved analysis of the data in chapter 6. We think it would have been better to include this section following the introductory chapter so that the readers would have the chance to get acquainted with the research design and navigate through the empirical units more easily.

The final chapter concludes that social participation is shaped by successful educational biographies, but also by socio-cultural background, by formal educational qualifications of both the interviewees and their parents, by intrinsic motivation and perseverance, and by the support of mentors and the German society as a whole.

Overall, Bildungswege und gesellschaftliche Teilhabe junger Roma in Deutschland is a good read for scholars and anyone interested in understanding the facets and complexities of the lives of young Roma refugees. While the empirical research took place in Germany, the results and the analysis could be applied to broad localities in Europe and beyond. The reader is introduced to critical issues and policy aspects that affect the lives of those in vulnerable and precarious positions. This book brings a valuable contribution to the field of migration of marginalised groups as well as education. 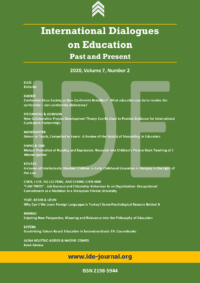 Sándor Karikó: Conformist Mass Society or Non-Conformist Rebellion? What education can do to resolve the conformity – non-conformity dichotomy?

W. Jason Niedermeyer: Driven to Teach, Compelled to Learn: A Review of the Role(s) of Storytelling in Education

Krisztina Kovács: Inclusion of Intellectually Disabled Children in Early Childhood Education in Hungary in the Light of the Law

Chen, I-Chi, Ng Lee Peng, and Chong Chin Ann: “I AM TIRED” – Job Burnout and Citizenship Behaviour in an Organization: Occupational Commitment as a Mediator in a Malaysian Private University

Ecenaz Yigit, Ömer Faruk Keser & Levent Uzun: Why Can’t We Learn Foreign Languages in Turkey? Some Psychological Reasons Behind It