IDE publishes thematically connected issues as well as others in which the title of the journal provides the sole orientation for the examination of educational events from historical, international and comparative perspectives. In this current issue you will find a mix of thematically oriented and thematically open contributions. The former refers to the 500th anniversary of the Protestant Reformation and aspects of contemporary reflections on this event. Over time, different worldviews have engaged with the educational and political legacy of the Reformation. With regard to these contributions, our journal does not favour any particular religious or secular, theoretical-scientific or research-method orientations. We support the position that the 500th year of the Reformation has not been declared as a jubilee inside Protestant circles and is not meant to be centered on Luther only (Käßmann, 2016). The Reformation was one of the world’ s largest historical transformation processes and has been depicted from different points of view, religious and non-religious, ecumenical and secular, with and without attempts at proselytization.

In addition to Luther, Phillip Melanchthon (1497-1560), the „Praeceptor Germaniae“, needs to be mentioned. Outside Germany in particular, his prominent significance for the Reformation and its ensuing developments in the education sector are not well known. Although we cannot claim to make a special contribution to a proper consideration of Melanchthon with this issue, we hope to do more so within the framework of one of the upcoming issues.

The Reformation provides a worthwhile example for exploring to what extent one can learn from history. Can discussions about the leading representatives of the Reformation and the reforms they initiated as well as their misconceptions and attitudes towards other Christian movements as well as non-Christian faith communities (for example, Jews) be useful for a deeper understanding of current problems and their solutions? It is important to know as much as possible about history in order to gain a perspective beyond the effect of the current moment (Diesterweg, 1956, p. 205). In other words: “Those who can not remember the past are condemned to repeat it.” (Santayana, 1905, p. 284) Historical knowledge can help overcome the compulsion to repeat evil, develop empathy toward people from other cultures and religious identities and surmount ethnocentric views.

The first part of this issue is introduced with a contribution by Gottfried Orth on Luther’s speech on God at the time of (early) capitalist civilization. For example, the author outlines Luther’s deliberations in this context and calls for contemporary critical social perspectives on capitalism as well as understandings of god in the vein of Luther’s theology, which can support current faith orientations in their engagement with economic and social developments.

Hein Retter analyzes selected publications on Luther and the Reformation with particular attention to current views of Martin Luther by historians, church historians and literary authors. He concentrates on their representations of Luther in the context of his roots in the Middle Ages, the outstanding accomplishments of the Reformation in words and images, critiques of Luther from a post-Christian perspective, and the future of churches.

In his contribution, Gerd Biegel shows an example of how the Reformation was a very heterogeneous movement, with different regional and local manifestations and developments. He highlights names such as Johannes Bugenhagen (1485-1558), Gottschalk Kruse (1499-1540), or Heinrich Lampe (1503-1583), who are little known today but without whose activities the Reformation was hardly conceivable in the city of Braunschweig in 1528.

Anja Franz & Dietrich-Eckhard Franz describe significant social utopias in the context of the German Peasants’ War and the Lutheran Reformation. They focus on Thomas Müntzer (ca. 1489-1525), Michael Gaismair (1490-1532) und Johann Hergot (ca. 1522-1527). The authors claim that Martin Luther’s 95 theses initiated the Reformation, but that Müntzer and other utopians spread the Reformation to all levels of society. Many of their society- and utopia-focused critiques pointed far beyond the then existing social conditions in their declarations and demands.

The focus of another contribution by Hein Retter is the question of tolerance and intolerance in the epoch between the Reformation and Enlightenment and in the context of the Catholic-Protestant schism. The results from an international conference presented here show that tolerance in the age of the Reformation cannot be confused with the mutual recognition of religious and cultural idiosyncracies when advocating for a peaceful coexistence of different groups in a pluralistic society.

With their arts- and literary-historical essay, Richard D. Scheuerman & Arthur K. Ellis bring a new thematic direction and, through the use of images, a visual enrichment to our journal. The authors deal with the portrayal of “House Fathers” and “People of the Fields” in the arts and folk literature since the Reformation. In early-modern German and Austrian arts and literature, humans’ relationship to nature in the context of the technological changes caused by the Industrial Revolution was often connected with ideas of the Protestant Reformation. A sustained engagement with nature was already one of the concerns of these nineteenth-century artists and literary authors.

Renate Girmes explicates why educational institutions should be considered „communities“ for human development. The author explores arguments for a new view on the tasks of the education system from a tradition of Christian thought and in this context discusses the sense and promise of baptism in its argument for the endorsement of the Gospel of John. A way of reading in this tradition is also developed, revealing what foundational information on the nature of intergenerational relationships can be found in the biblical text, and what connected challenges a professional education and learning practice faces.

Herbert Asselmeyer explicates the idea and concept of learning regions, to which school networks make an important contribution, because they are the only type of organization with compulsory enrolment. Learning regions can be a network of potential individual pedagogical institutions, in order to help discover and expand gifts and talents even more effectively. Communities or „communes“ („Gemeinden“) are „the true learning places, for children and adults“.

Nadine Comes’ contribution informs about the results of a qualitative study on negative formative experiences in the language acquisition of two- to six-year-old children in a bilingual German-French daycare centre. The author explicates how the investigated „negative experiences“ were related to the existence of a learner’s inner language and aligned with previously defined competence areas.

Alexander Y. Daniliuk & Alla A. Faktorovich describe “sense” as a fundamental pedagogical category. The authors analyze different definitions of the concept “sense” by separating it from “meaning” and similar terms. “Sense”, “Smyslosfera” (смыслосфера; sense sphere) constitute the real content of education, which consists of conscious, free activities and which should become a key element of educational content. The authors are aware of the difficulties in adequately translating the terms in the article’s content and are interested in a constructive critical discussion of this terminology.

Regarding our next issues we are continuing with our wide,  thematically open orientation toward educational developments from historical or international-comparative and intercultural perspectives. [For issue 3-2017 (online: October 15, 2017) we will additionally take up further contributions on the theme of “International and Intercultural Dialogues on Education and Faith in the 500th Year of the Reformation”.]

Authors are requested to follow our Instructions to contributors (!)  and to send their articles for issue 3-2017 by August 31, 2017.

We continue to look forward to high-quality articles, essays, and book reviews! 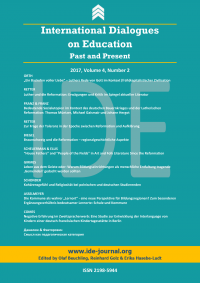 Richard D. Scheuerman & Arthur K. Ellis: “House Fathers” and “People of the Fields” in Art and Folk Literature Since the Reformation