The authors of the contributions to this issue are from Israel, China, the USA, Russia, Taiwan, Poland and Germany, and they represent different disciplines in the Humanities. Correspondingly, this issue adheres to one of the fundamental concepts of the journal – to promote the international dialogue on problems in education, where not only educationalists and practitioners in education can keep themselves informed and exchange opinions on current developments, research findings and points of discussion in educational research, but also colleagues from neighbouring disciplines in the Humanities and Social Sciences.

The contribution by Noam Lapidot-Lefler (Israel) is entitled ‟Cyber Victims and Cyber Bystanders in an Ethnic, Cultural and Religious Context: The Differences Between the Sectors in Israel”. The author sees the causes of mobbing incidents in connection with the culture in which both ‘tyrant and victim’ were brought up and educated. Especially the influence of two variables on the quota of online mobbing was examined: the ethnic, cultural and religious descent of the participants (Jewish, Moslem and Christian Israelis) and also the degree to which they believed in collektivist versus individualistic principles. In the opinion of the author there exists a correlation between more individualistic attitudes of the participants and less probability that they will be witnesses or victims of online mobbing.

Xu Bian (USA) and Jin’e He (China) examine the „Influence of a Morphological Consciousness on the Lexicon of Advanced Chinese EFL Learners”. They look at the inter- and intra-relatedness of two multidimensional constructs: morphology and vocabulary, in particular compounding, derivation from real and pseudo words, reading and learning new words and these are their evaluation variables. The contribution is an authentically linguistic discourse and elicits associations to general educational issues.

The key element of content in education for Alexander Ya. Daniliuk and Alla A. Faktorovich (Russia) is the sense (resp. meaningfulness, purpose, deeper meaning) behind a term, expression or matter, as opposed to its pure denomination. They discuss „The Meaning Behind Concepts in Different Specialist Disciplines and Cultures: Reflections on Developments in Europe and in European Secondary Education“. They emphasize the urgency of a transition from knowledge-based to meaning-centred (sense, meaningfulness …) education. They believe that their „translation“ methodology will find universal application in education and lead to new pedagogical thinking, technologies and content.

The contribution by Hui-Wen HSIA, Sophia Shi-Huei HO and Robin Jung-Cheng (Taiwan) ‟Innovative Pedagogy: A Case Study – the Culinary Arts College in Taiwan” describes a new teaching approach in the area of lifelong learning. People need certain competences in order to manage their lives in a world full of complex uncertainties. The authors describe their approach as phased, thematic and socialized (PTS) Pedagogy. In the framework of a qualitative case study interviews were done with stakeholders, PTS practice was observed and analyses of school documentation were carried out. The study points to successes through a learner-oriented approach and through the development of problem-solving abilities, but also through a culture of mutual partnership and intensive cooperation in the community of teachers.

Malgorzata Schonder (Germany/Poland) undertakes a study of ‟The Capacity to Cope in a German-Polish Cultural Comparison”. Against the backdrop of comparative cultural coping research, the author examines whether and how far the capacity to cope in young people differs due to their origins in a more individualistic culture (like Germany) or a more collective one (like Poland). Stress is more strongly perceived in German students than in their Polish colleagues. German graduates have better opportunities in the job market, greater value is placed upon individual career design. Finishing a university course is no guarantee of finding a job for Polish students, sometimes it is even a hindrance. The differences might lodged in the character of the two cultures, which have been influenced by different outlooks on life and religious persuasions (Protestantism v. Catholicism).

The theme of the empirical study by Henrike Genzel and Anja Franz (Germany) is “Decision-making on Doing International Voluntary Service”. In the sub-title, the role of “social origins and education of the volunteers” is questioned. The authors use the rational-choice theories of educational decisions formulated by Boudon (1974). Focused interviews with prospective and former ‟traditional” and ‟non-traditional” voluntary workers of the organisation ‟Aktion Sühnezeichen e.V.” [Atonement] served as a data basis. Motivation and the decision path are characterized above all by the accessibility of the voluntary services. For ‟non-traditional” voluntary workers favourable occasions are decisive. The decision processes of ‟traditional” voluntary workers are characterized more by rational considerations. The financial costs and rigid information flows are seen as structural barriers.

We close our this year discussion on Martin Luther and his role in history with the contribution by Hein Retter (Germany) ‟Martin Luther, the Jews, National Socialism – A Critical Review of the Reformation Anniversary”. Selected publications and the positions of experts on research into the Reformation and Luther are critically reviewed, both informatively and constructively. The focus is on the analysis of the findings of two conferences during the quincentennial celebrations, in which the question of Luther’s relationship to the Jews was discussed. Behind this lies the ongoing question of Luther’s enmity towards the Jews as the legitimation for anti-semitism from the 16th century to the genocide practised on the Jews in Europe by the national socialists.

There is a further section with reviews on more recent interesting publications.

Fabian Mußel and Renate Girmes review the book by Arthur K. Ellis and John B. Bond: „Research on Educational Innovations,“ which was published in 2016 in the fifth edition. The book not only provides extensive insights into (anglo) American educational science and its examination of specific pedagogical innovations, but also conveys fundamental considerations for theoretical and methodological developments in educational science. The reviewers note that the sophisticated and at the same time reader-friendly, clearly arranged presentation reveals an emphatically scientific and positive influence of psychological provenance. The book is aimed at teachers, education policymakers, educational advisors and other actors in the field of education and aims to facilitate the critical and constructive handling of innovations.

Heiko Schrader reviews the book ‟Globalization and Historiography of National Leaders. Symbolic Representations in School” edited by J. Zaida (Australia), T. Tsyrlina-Spady (USA) and M. Lovorn (USA) in 2017. The reviewer highlights the usefulness of the book for readers in the humanities with an historical and interdisciplinary interest. Those readers with a broader regional or even worldwide perspective will find much interesting material in the case studies discussed. The reviewer is a sociologist and co-designer of a European Studies course. He emphasizes that the examples from Europe in the book offer especially rich sources of information for teachers and students who do not necessarily work in this teaching and research area.

Sebastian Engelmann reviews the book by D. Käbisch and M. Wermke (2017) entitled „Transnational Border Crossings and Cultural Contacts. Historical Case Studies from a Religious Pedagogical Perspective.“ This is a collected volume of various studies on historical and comparative religion pedagogy. The reviewer points to the foundation that is created by the editors and authors and for further publication work reflecting the methodology of transnational research into religion and education. There is a clear opening by way of such inherent interdisciplinary research for a discussion of theoretical and historical cultural approaches.

Hein Retter presents a short 2017 autobiography by Margot Pampel (and Felicity Zwalf) entitled: ‟As Chance would have it. From Jena to Melbourne”. Margot Pampel, born 1922 in Jena as Margot Reinhardt, an only child, was a victim of Nazi persecution and a survivor of the holocaust. She lives today in a residence for senior citizens in Melbourne (Australia). As the reviewer emphasizes, her very moving memories of her childhood and life experience are written in an English understandable for pupils in school with some years of English.

As mentioned above, we publish mostly thematically open, but also more focused editions, like, for instance, academic conference volumes. Our next edition will appear at the end of April 2018. We look forward to further receiving high-quality articles, essays and book reviews.

Reinhard Golz (Germany) – on behalf of the Editorial Board 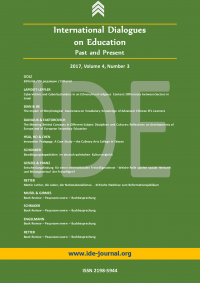 Alexander Yaroslavovich Daniliuk & Alla Arkadievna Faktorovich: The Meaning Behind Concepts in Different Subject Disciplines and Cultures: Reflections on developments of Europe and of European Secondary Education

Hein Retter: Book Review / Рецензия книги / Buchbesprechung: Pampel, Margot & Zwalf, Felicity (2017): As Chance Would Have It. From Jena to Melbourne